Situated at the southeast corner of the CF Rideau Centre, this purpose-built rental tower adds 288 units to Ottawa’s housing market. The design responds to the complexity of its adjacency to existing loading, parking and pedestrian entryways while creating a more vibrant edge to the urban mall.

Formerly an underutilized property, the redevelopment intensifies the site and in doing so creates an improved pedestrian environment. The tower design enhances the character of the skyline through its articulated massing and high-quality materials, while protecting the visual integrity and symbolic primacy of the Parliament Buildings and other national symbols.

One of the key elements toward reorganizing the site is the relocation of the former City Registry Office, a designated heritage property built in 1874. Relocating the property approximately 18 metres north provides a prominent setting for the building, maximizing its importance in the public realm. The redevelopment includes the preservation and adaptive re-use of the Registry Office which will intersect the tower in a three-storey glass atrium. The simplicity of the atrium’s glazed curtain wall creates a neutral backdrop for the articulated form of the Registry Office, allowing the richness of the historic building to be showcased as a defining element of the public realm. 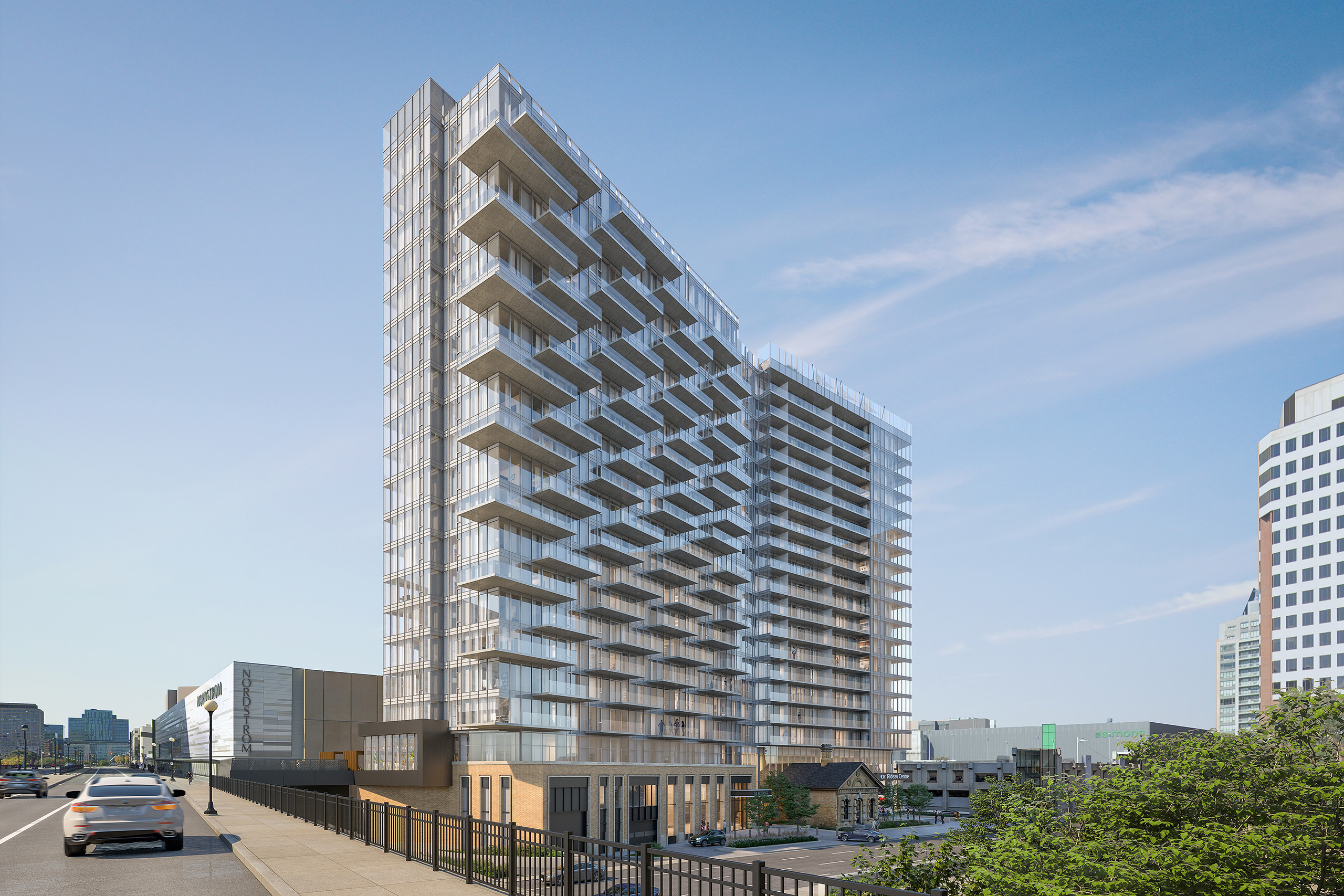 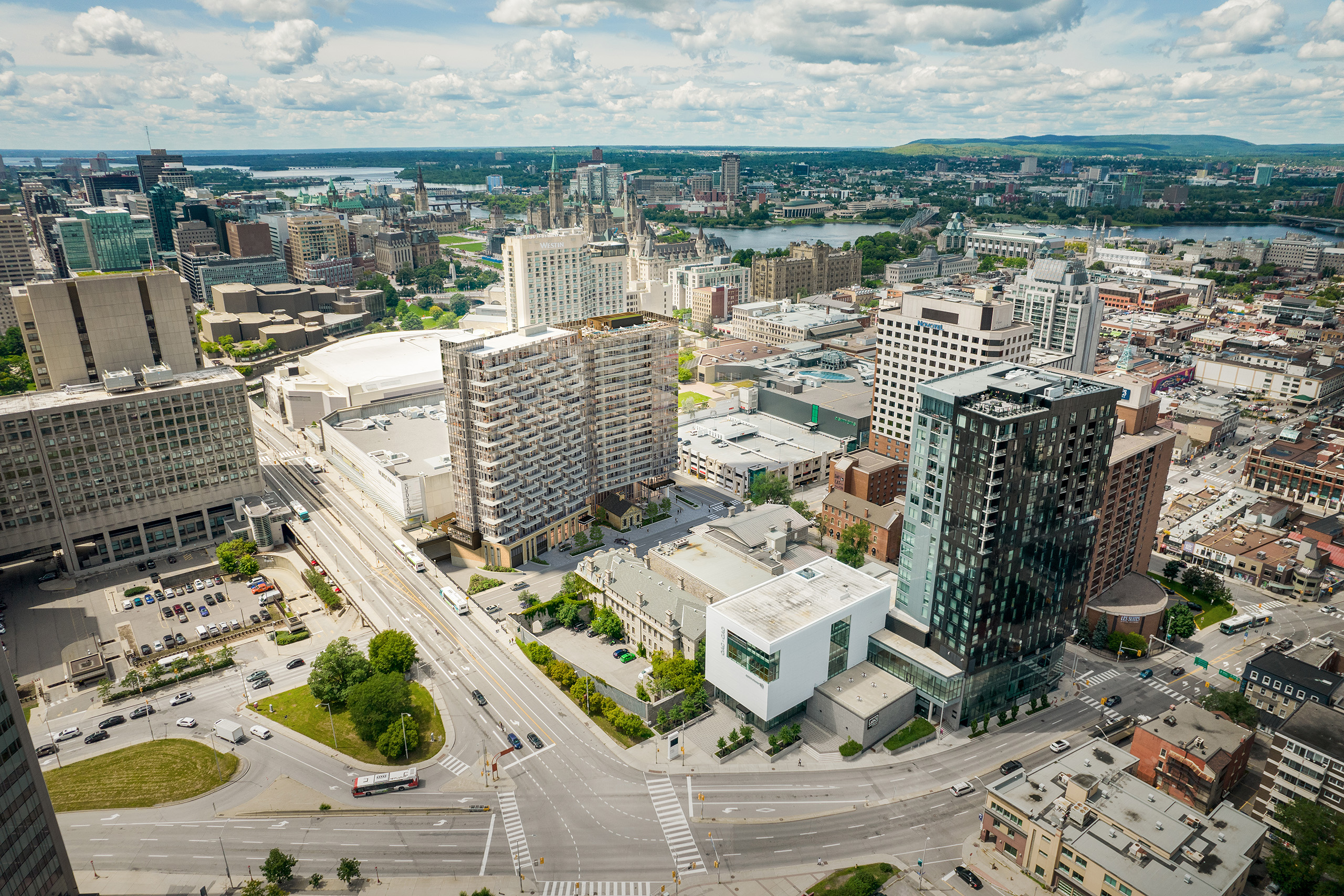 The tower is designed as two distinct volumes at 20- and 21-storeys. The north volume is set back from Nicholas Street to create an entrance plaza and promote the prominence of the Registry Office. The south volume, angled towards the southeast, creates a shield for the residential entrance from the mall parking and loading dock access. This creates a generous separation from the CF Rideau Centre wall to the west and allows for an outdoor BBQ amenity space. The design provides a unique offering of wide and shallow units with over 9 metres of exterior façade, permitting maximum daylight and views of the city. All units include oversized balconies with large sliding doors to maximize outdoor space for the residents. The program is complete with extensive amenities that includes party rooms, children’s playroom, gym with wet rooms, a dog walk and relief area, and a rooftop outdoor pool and hot tub with a 360-degree view of the City.

The existing CF Rideau Centre entrance off Nicholas Street is set back significantly. A new atrium that forms part of the podium extends from the existing mall entrance to the new corner plaza at Daly and Nicholas. The entry sequence and large atrium space accessing the mall will be perceived as a public amenity space though it is private land. The nature of CF Rideau Centre as a semi-institutional commercial space is such that the public will feel comfortable and welcomed into the large atrium. As a well-lit and highly visible area, safety and comfort of the pedestrians will be maximized.

For over 40 years, Zeidler has been collaborating with Cadillac Fairview on numerous transformative projects across Canada. The Rideau Registry residences reflects our mutual values in cultivating vibrant urban places through modern, sustainable and accessible designs. The redevelopment supports the City’s intensification targets providing much-needed rental units. It will be a significant addition to the community with its enhanced public realm experience, contributing to the vibrant Byward Market neighbourhood.

The Residences at RCMI